Setting Marketing Expectations with the Visionary 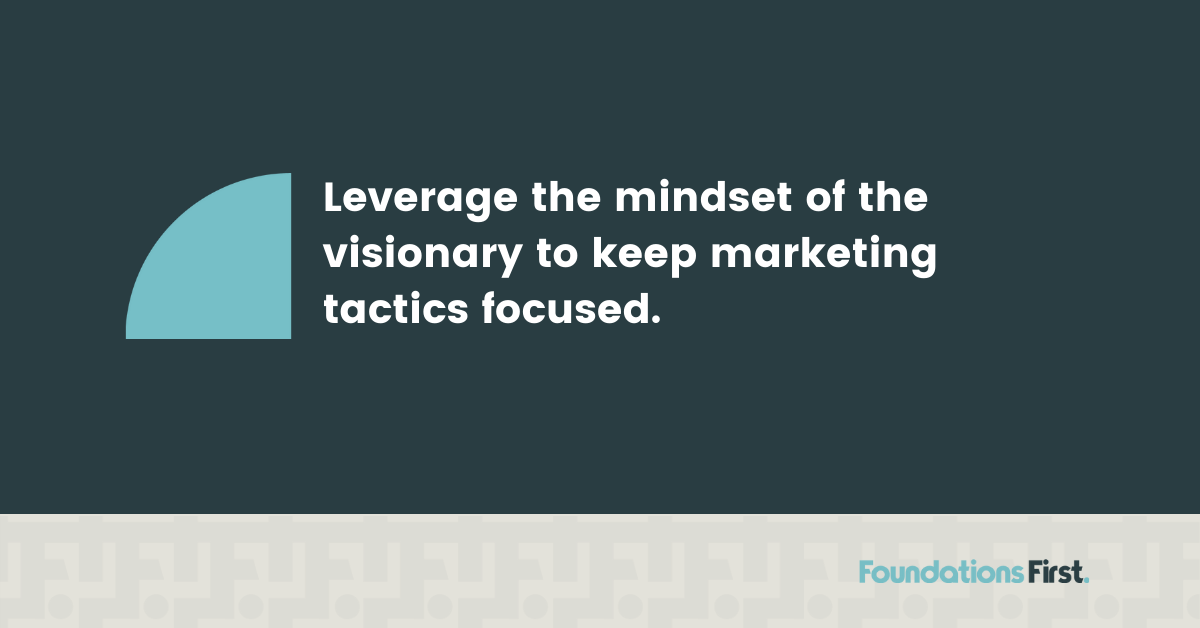 FOMO. Fear of missing out. We’ve all experienced it. But being in Vistage, Stas Balanevsky sees it all the time. Founders come back from a Vistage meeting excited and inspired. Then they’ll tell their team that they just have to be on the next platform.

When I met with Stas, he asked me how I advise marketing departments to protect themselves from the visionaries while also testing the next big thing. The key is setting expectations of future goals.

Leverage the mindset of the visionary to keep marketing tactics focused

Instead of protecting a marketing department from the visionary, I recommend using the visionary as a guide. Whomever plays the visionary role at the company knows where they want the business to go 2, 3, 5 years down the line. But sometimes they need marketing to remind them of the end goal and determine how the next big thing will help them reach that goal.

[Note, if you are running on EOS but haven’t defined your vision, you can download a Quarterly Rock that we’ve written for you. Just copy and paste.]

The visionary will tell me, “Hey, Michelle, we want to be on TikTok. People are saying TikTok is all the rage. We wanna go do that.”

I’ll say, “Great! Let’s talk it through so I understand how you see TikTok getting us closer to your vision.”

After diving in, I can usually point out how the newest thing is not where their target market is. After seeing the data, they’re fine not doing it at all.

Leveraging the visionary saves my team weeks or months of effort because I remind them that this shiny new object won’t get them where they need to be. Period.

Don’t try something new just for the sake of doing something new (unless there is a strategic reason of course). You’ve got to keep your goals in mind.

A marketing strategy will help you do less, but better

Stas told me a great story about the how the British rowing team wasn’t able to win so they developed a mantra – Will this make the boat go faster?

Everything they did, every decision they made, was based around this question. And if the answer was yes, they would do that with as much effort and vigor they could. If the answer was no, they didn’t do it. Simple as that. Their mantra eventually led to an Olympic win.

This mantra works just as well in marketing. I use the idea of focusing on the end goal to cut the fat where companies are already doing things. I look to see where everyone is spending their time.

Next, I see if any of these things are dragging the boat down. If the answer is yes, I cut it out! They won’t get you where you want to be.

Before using a new tool or dropping 40 grand on a conference, ask yourself: Is it going to get me closer to my vision? If you’re not sure, or it’s not a, “Hell yes, it’s getting us closer,” ask yourself another question: Can we spend this time and money better, elsewhere?

Watch the conversation with Stas below.

So we have all of these people that get, want, and have the capacity to do their jobs. And they’re good at it. And they’re passionate and they love the company. And then they touch marketing and that world spins at a rate that they can’t keep up with. Right. Yes. I’m a big proponent of peer groups.
I’m in Vistage. I sponsor EO. So I see it all the time. You get a founder that comes back from a Vistage meeting is like, we gotta be on the next platform. And everyone goes, Ugh, but, but maybe it’s a good idea.
How would you advise marketing departments to A.) Protect themselves from the visionaries and B.) Be able to go out and test and measure and create a test loop on the next, whatever?  I actually leverage the mindset of the visionary.
Whoever plays the visionary role at the company, they know where they want the company to go 2, 3, 5 years down the line. Sometimes they need marketing to remind them. So it goes like this. They say, Hey, Michelle, we want to be on TikTok. People are saying TikTok is all the rage. We wanna go do that. As a really good marketer. I can say great visionary. Let’s talk about how we can use that to get to what you told me you want to be in two years. Let’s discuss this. Is it where our target market is, and then I can dive in and then they’re fine with me not doing it at all.
It has just saved my team weeks or months of effort because I’ve reminded them this is not going to get us where you want to be. Period. As one of the OG EOS implementers says the answers in the tools. Yes. So you look at the VTO. I forget who I was sitting with, but they told a story about the British rowing team, how they weren’t able to win.
Weren’t able to win, weren’t able to win, and they developed a mantra and that mantra was, will this make the boat go faster?  Everything they did, every decision they made was will this make the boat go faster? And if the answer was yes, then they would do that with as much effort and vigor they could.
And if going to the pub with the mates, the answer was no, it would not make the boat go faster. They didn’t do it. And I forget which Olympics, I think it was Sydney, but the men’s heavy eight ended up winning. Exactly for that same reason, for me, three-year picture is that, will that make the boat go faster?
It’s right in between the pie in the sky, big, hairy, audacious goal ten-year target and the one-year plan. We’re actually going to do this. Yup. Is it an amazing, it really is that simple to cut out the fat, like it is. Yeah, right. So a lot of times when we come in, people are already doing stuff. So we look okay, where where’s everybody spending all their time.
Is it trade shows? Is it conferences? What are the things that are happening? And you use that same test. Are any of these things dragging the boat down? Is there someone who’s writing BS content just to do the content with no purpose whatsoever. Great. Let’s cut that out. It’s not getting us where we want to be.
Let’s be more strategic. Let’s do less but better.
How do you put fear on a scorecard? Right. That’s great. Love that. No, but it’s true, right? I mean, there’s so many, there’s so many people that are like, well, we have to go to the, the five letter acronym trade show every year because our competitors are there.
And if we’re not there, they’re going to tell everybody that we’re out of business and then there’s going to be a vacuum and then we’re dead. And then we’re going to lose our booth space. So can someone cut the $40,000 check please? Yeah. That’s not good enough for me. Yeah, that’s it. But like you’re up against it.
When you talk to people, they’re like, I’ve been going to the show 15 years and I’m a $20 million business and there’s no way I’m getting rid of it. So the second part of my strategy, right? Number one, is it going to get you closer to your vision? So is it making the boat move faster? Number two is can we spend that time and money better, elsewhere? So if you’re dropping 40 grand on a conference and you cannot tell me yes, that is for sure. It’s not a hell. Yes. It’s getting us closer. Where else can we spend that money? We know, like, for example, ads, let’s just use that as an example, we know exactly what we’re going to get for $40,000. We know how many leads it’s going to bring in.
So let’s go put it over there this year. Like it’s almost guaranteed. That usually takes the fear away. That’s just slaughtering sacred cows, right. That is frightening for people. It’s terrifying. 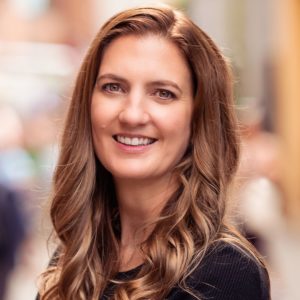 Learn the proven marketing framework that bridges the gap between strategy and tactics for lean, focused, and confident marketing. Get Started »

Get marketing tips, tools, tech, and strategy straight to your inbox. We only send the good stuff.